On the fifth day of Navaratri, Devi Skandamata is worshipped alongside her son Skanda or Lord Muruga in child form on the divine mother’s lap. Parvati, Gauri, and Maheshwari are some of the other names for Devi Skandamata.

She is known as Skandamata because she is the mother of the warrior deity Skanda. Maa Skandmata is another form of Maa Durga who is said to protect her devotees in the same way that a mother shields her child from harm.

She is a powerful goddess whose love and care aided Lord Kartikeya in his victory over the demon Tarkasura.

Lord Shiva has married Devi Sati a long time ago. However, when Sati immolated herself at her father’s Maha Yagna, Lord Shiva became enraged and devastated. He made the decision to abandon all worldly affairs and went into deep penance right away.

Soon after, a demon named Tarakasura began causing panic and havoc by attacking the other Gods. Tarakasura also had a curse that only Lord Shiva or his child could kill him. This was a source of great concern because none of the Gods could defeat him.

As a result, Sage Narada met Maa Parvati at the request of all the other Gods. He gave it to Ganga, who safely carried it and deposited it in “Saravana.”He told her everything about her previous life as Devi Sati, as well as the reason for her current birth. Sage Narada explained that Maa Parvati and Lord Shiva would have a child who would defeat the demon Tarakasura.

Maa Parvati, on the other hand, had to engage in extreme meditation and penance in order to convince Lord Shiva that she was an incarnation of Sati (Tapasya). For over a thousand years, she abstained from food and water and practiced severe penance.

Finally, Lord Shiva recognized her devotion and agreed to marry her. A fiery seed was created when Lord Shiva’s energy combined with Maa Parvati’s. This fiery seed, on the other hand, was so hot that even Lord Agni, the God of Fire, could not stand it. 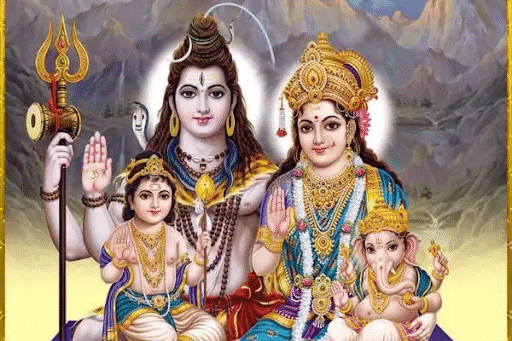 The seed was cared for here by six sisters known as Krittikas (mothers). The fiery seed matured into a baby boy over time. Because of the Krittikas’ care for him, this baby boy became known as Lord Kartikeya, the son of Lord Shiva and Maa Parvati.

Lord Kartikeya was soon appointed as commander-in-chief of the Army of Gods and given special weapons to defeat Tarakasura. Kartikeya then engaged in a fierce battle with Tarakasura, eventually defeating the demon and bringing peace to the world.

Because Kartikeya was born from an effusing, heated seed, he was given the name Skanda, which means “effusing” in Sanskrit. And his mother, Maa Parvati, became famous.

Devi Skandamata is the presiding deity of Lord Surya (the sun), worshipping her can bestow radiance and sparkle on you. She can calm your mind, body, and soul and assist you in achieving divine contentment. It is believed that she bestows salvation, power, prosperity, and treasures to devotees.

If he happens to worship her, she can bestow oceans of wisdom on even the most illiterate people. Skandamata, who possesses the brilliance of the sun, fulfills all of her devotees’ desires. He who is selflessly devoted to her achieves all of life’s accomplishments and treasures.

Skandamata worship purifies the heart of a devotee while worshipping her, the devotee should have complete control over his senses and mind… He should liberate himself from worldly ties and devote himself entirely to her. Her worship is blessed twice.

Skandamata devotees are radiant with divine splendor. Her worship leads to salvation in the end. She is commonly known as “The Goddess of Fire.”

Which colour is associated with Maa Skandamata?

Yellow/Orange coloured clothes are worn on the fifth day of Navratri, as dedication to Goddess Skandmata. These colours stand for optimism and joy. This warm colour keeps the devotee cheerful throughout the day.

What to offer as a ‘Bhog’ on the fifth day?

Skandamata is offered bananas as a symbol of good health. While some devotees present her with fresh bananas, you also may prepare a delicacy with bananas and present it to the Goddess.

Where is Maa Skandamata abode?

Vishudda Chakra is the abode of Maa Skandamata

What does the idol of Maa Skandamata look like?

Devi Skandamata is symbolised with three eyes and four hands with infant six-faced Lord Skanda on her lap. Riding a lion, the Goddess holds a lotus flower in her upper right and left hands while the other two hands are in defending and granting mudras.

With the Blessings of Maa Skandamata, we’ve delivered this article in the best form and hope that it helped you! If there are any discrepancies you can mention them in the comment section. May Maa Skandamata shower all the blessings and strength on you!